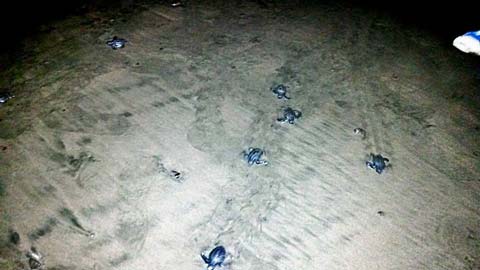 “When I was fifteen, all I wanted was to go off to some other world, a place beyond anybody’s reach. A place beyond the flow of time.”

-Haruki Murakami, Kafka on the Shore

Like in every good place where we have fun, here in Panama time runs very fast. It’s been already a week since last post and it seems to be 2-3 days.

Now I have a surfboard! The only one in the area was broken and glued (35$!) however I broke it yesterday 😛 Still worth it to buy. I found a carpenter that may fix it. Fortunately this monkey bought another one so I can keep surfing sometimes! We also had an amazing night when turtles tries to leave the sea, we found them between people in the bar and everybody tried to help them by carrying them back to the water 🙂 Apparently this event was very rare as locals were asking us for the photo and where did we see it. I found out that it is very important to have a hobby in a place with such a small population, far away from the city. It might sound like a paradise, but after some time we miss diversity in our everyday life – at least I do. Maybe it is easier for people who grew in rural areas, for such a townsman like me it was a shock. So I also started playing guitar again, hopefully it will show some effects pretty soon.