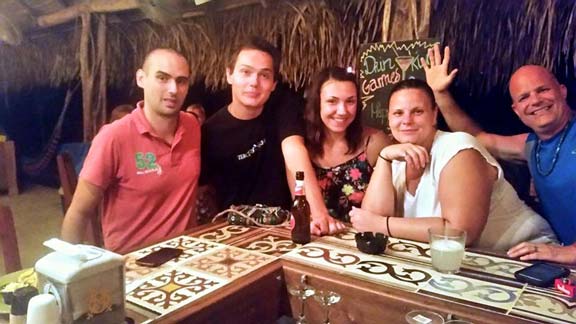 Each story and adventure has its beginning and its end. After many perturbations in the job, while living in a jungle without possibility for any other better option than being a receptionist or a bartender, we decided to leave. So why is Playa Venao and probably most of the other ‘paradises’ a good place to rest, but not to live?

It’s like going to a big restaurant, or visiting any medium size company. Playa Venao has 150-200 locals, and everybody knows everybody. People talk, gossip and spread rumors about everything. It’s like having this annoying old lady from the house in front that tells your mom what time you came back home. This lady is everywhere!
Any examples?

Living in a place like this is a struggle:

I won’t point here companies that have been doing it like this, and not all of them are so bad, however I have never seen such a racism before. Some investors are coming to Panama not because of its growing economy, but because they can treat people as they want. You can make a business in Panama without being smart, it is enough to pay people much less than they want or need, and charge customers for using Panamanian earth while destroying it to make more profit.

Those are the reasons I wouldn’t recommend Playa Venao to anybody.

I won’t describe more as I’d feel disgust blacken this place in Internet just because I didn’t like it. You have to know that customers like this beach- most of those things you cannot see from the outside and some of them you don’t want to. I know that it is not like this everywhere because people who have been quitting jobs every week (literally every week somebody was leaving) have been talking about good places in Columbia, Peru or Costa Rica.

Maybe it’s a good habit to read about a place before going to vacations? Who and what do we support with our money? It is all about people

It always was. Paradise can be a hell, if wrong people treat others in a wrong way. Best regards and good luck to every nice person I met there, to everybody that decided to run as we did, and to everyone that decided to stay. Best regards to people from Selina Hostel – Brandy and Antonio who make this place awesome. The most positive bar on the beach that saved my life and my memories from there. Good luck to Dean – The Lost Alaskan! and many others, see you in a better place, where people value what is really important: not money or their inventory, but other people.

Good luck, see you around the world, and meanwhile I’m going to Panama City!