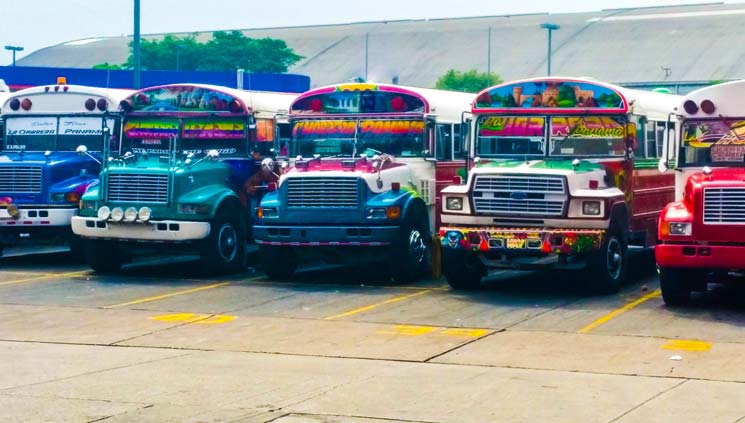 Traveling in Panama can be tricky, a specially if we want to change between buses or any other type of transportation which has a schedule. I Europe where I’m from everything is more or less on time. Few months ago I had a chance to visit Budapest – Hungarian capitol. Metro was coming every 3 min with no delay. So how does it look in Panama?

Panama is a small country and so the infrastructure should be easy to make. Everything is in theory connected with the Panama City, however often we have to change for other bus to arrive somewhere. We have a variety of ways to travel from place to place. We can rent a car, travel by public buses, ferries or private transfers including hitchhiking. It’s important to consider the length of your travel to don’t waste too much time, and eventual stops.

Buses between cities leave often every hour between a morning and afternoon. Prices are small, for over 300 km I have paid 9.70$, it was with an air condition and TV. If you think like I did that 300 km in a bus with an average of 80km/h would take around 3.5 – 4 hours.. you are wrong. Prepare yourself for rather 50km/h or less. It took me 6.5h to travel from Panama City to Playa Venao.
Tip: Take with you some warm clothes, temperature in my bus was lower than in the fridge.

Locals told me that there is only one domestic airline: Air Panama. As you can imagine, prices without having any competition are very high. There aren’t also too many domestic airports around, Air Panama flies to Bocas del Toro, David, the Darién, and some islands in the Guna Yala and Pearl Island archipelagos. I would suggest this type of transportation only if your time in Panama is very limited.

This is a good option, many companies can offer quite low prices starting with 9-10$/ day for a small car, ending on 60-80$ for a big van. Fuel is also very cheap in Panama, so count your money and think won’t it be easier to pay 70-100$ for own car for few days, instead of spending hours in buses or each time 2-10$ on a taxi. Only for traveling from Tocumen Airport to the city and back we’ll spend 60-80$ if we won’t take a public bus.

We can rent a small bus for us, which will take us in any destination, which will of course cost but we won’t take any risk of being late: just enter and relax.
Tip:Every bus has included 1h of stop during the travel, so you can take some pictures or eat something in a restaurant on your way.

I’ll write about those in another posts, but remember that if you are not on the starting station be sure to be there before time and be ready to wait even 30min. Cheap and always late, but with a great local atmosphere.

Most of people will stop and take you, a specially in the rural areas. Sometimes there might be no car during 30min of waiting, but unless its full it will stop for sure. It’s also a great opportunity to learn some Spanish and meet locals. I wouldn’t recommend it if we have any schedule for our trip. No risk no fun 🙂

If you want to see one of the Panamanian islands and you didn’t or couldn’t choose Airlines, you should consider a boat. Here you can find one of the companies and its schedule: Sea Las Perlas.

Be ready to stay in a small city during a night or take a taxi for sometimes even 50km. Local buses are often going once or twice per day, so if you will be late for the last one like I did, you’ll have to pay. I took a bus at 11 from Panama City, arrived in Las Tablas at 17 and last local bus was going at 13.. Adventure! 😉

Take a bus from the bus station (Albrook Bus Station) to Las Tablas (to save money take a bus at 8!). Than in Las Tablas you will catch a direct private bus to Playa Venao. If you will be late, you can take one to Pedasi and change there for Playa Venao or take a cab. Taxi from Las Tablas to Playa Venao should cost between 35$ and 40$.